Over the last five decades, plastic pollution on Earth has doubled. According to the Guardian, mankind has produced over 8,3 billion tons of plastic since the middle of the 20th century, which is equal to the weight of more than 800,000 Eiffel Towers. 91 % of those 8,3 billion tons have never been recycled and are either burned, landfilled, or for a long time trashed in our environment. COVID-19 has only made the situation worse – It’s high time we united for a change

It seems like even a global pandemic was not able to cut down plastic production – the Covid crisis accelerated plastic consumption across the globe multiple times. According to some scientists and environmental organizations in Europe, soon enough there could be more masks than jellyfish in the Mediterranean sea. Adding these projections to the already infamous 380 million tons of plastic produced per annum (50 % of it is single-use), the plastic waste issue becomes more complicated than ever.

In the end, it turns out that at the beginning of 2021, the world is facing an even deeper and more severe plastic pollution crisis than 2020 and 2019. Even before COVID-19 struck the world, scientists have warned that global plastic production will increase steadily in the next eight to nine decades, especially in the developing regions, some of which are expected to exceed 1,300 million tons of plastic per year. This is why the proper management of plastic waste must be a number one priority concerning environmental conservation in 2021 and the upcoming years. 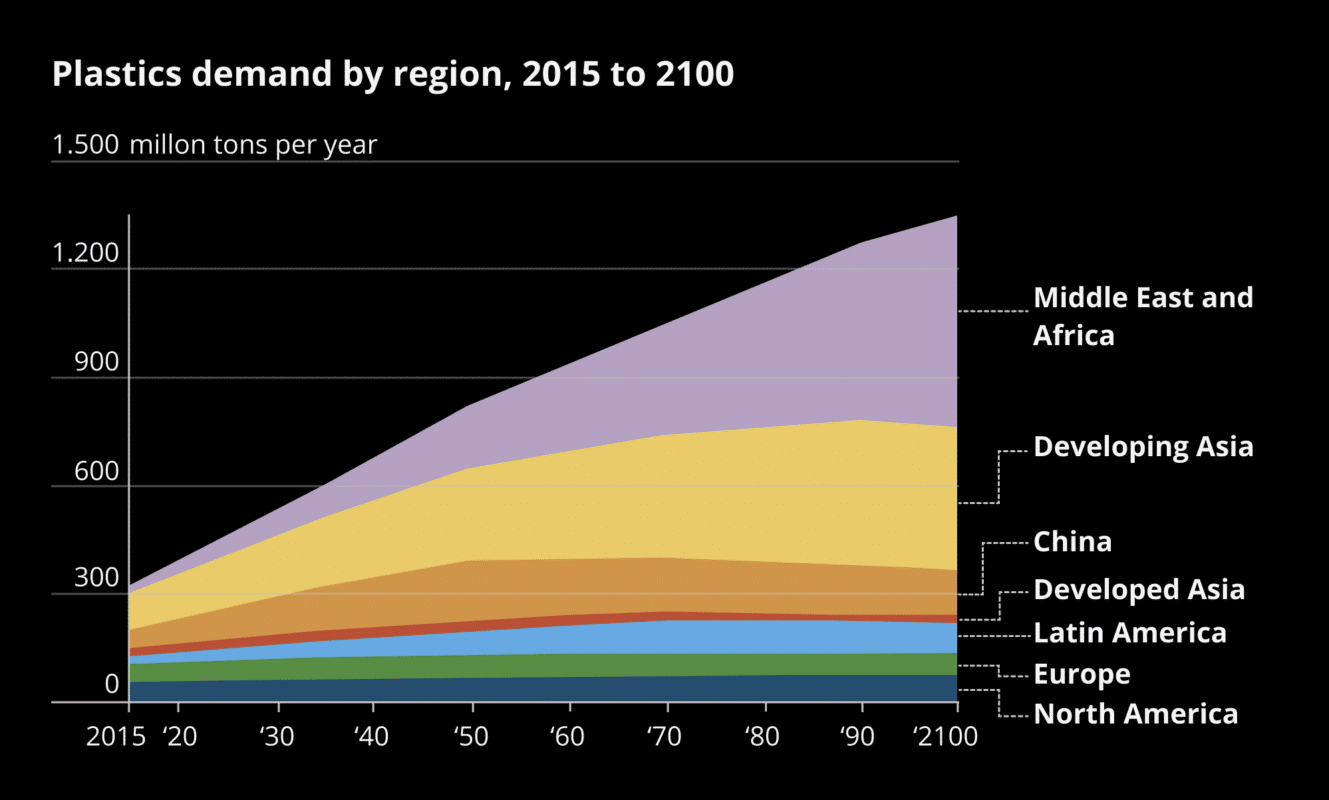 Plastic pollution affects you more than you believe

Around 90% of the global plastic waste goes to landfills, where it is buried below the ground. Those landfills are the reason why our soil and underground waters continue to get severely polluted – spreading the very same pollution to the rivers and other spheres of the environment. According to EURELCO, in Europe alone, there are more than 500,000 landfills, many of which are located in areas close to the cities, which make them even more dangerous for local people.

In 2018, landfills around the world dumped more than 27 million tons of plastic waste. When exposed to continuous sunlight and higher temperatures in general, plastic waste becomes extremely hazardous, emitting Nitrogen Oxide (NOx) – a gas, which is 10 times more dangerous than C02.

‘The gate for plastic pollution’

The other most severely polluted part of our environmental system are the oceans – now many people refer to them as the number one ‘gate for plastic pollution’. Having in mind that 730 tonnes of waste are dumped only in the Mediterranean every day, much of it being plastic, the problem gets even worse. The decomposition of plastic in the sea or ocean environment leads to its breakage to the so-called microplastics, which are easily mistaken for food by marine animals, resulting in more than 100,000 animal deaths per year.

Unsurprisingly, some of those microplastics make their way to our food on the table – according to the EU, the ‘health effects of those microplastics in human bodies are still unknown’. Nevertheless, it is possible to turn the tide – and start looking at this plastic waste as a valuable resource, which can be used to produce energy. 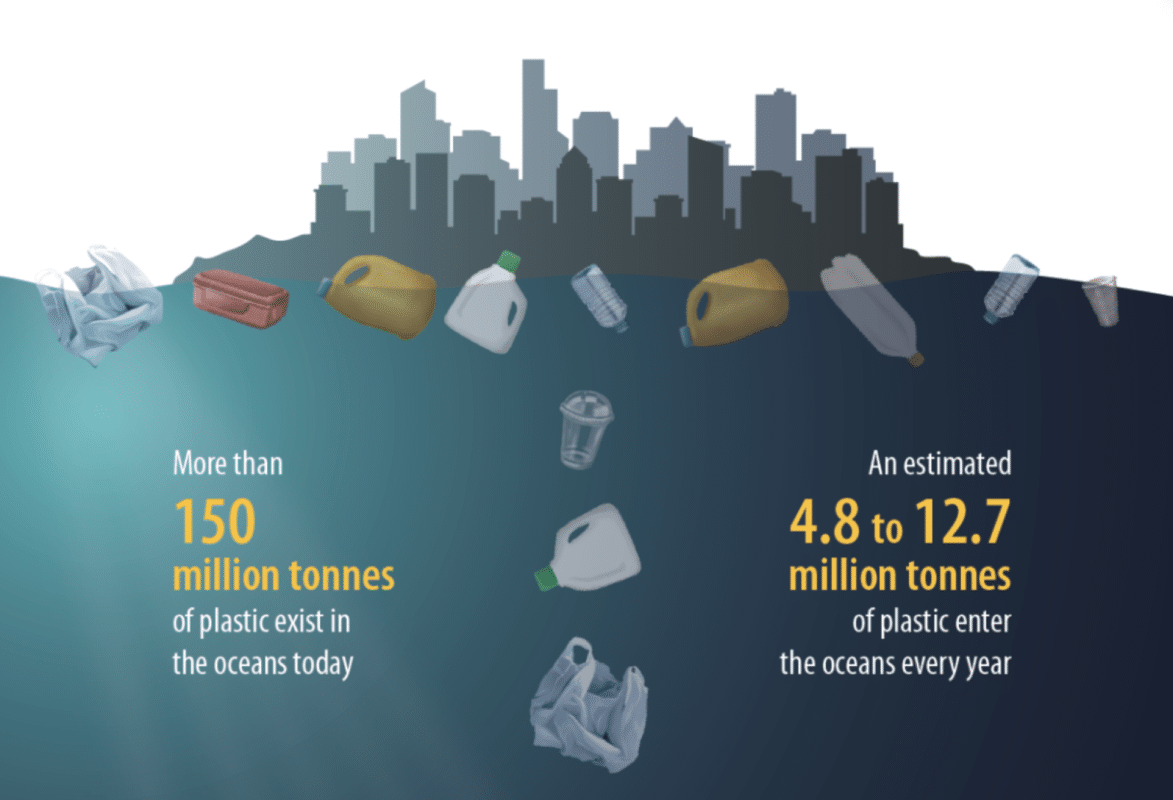 How can we recycle so much plastic waste?

When it comes to plastic recycling, there are two main ways to do it – via mechanical or chemical recycling. Mechanical recycling is one of the most widely used methods to recycle plastic in Europe – the recycling process focuses mainly on crushing the plastic into smaller parts while preserving the molecule structure. Mechanical recycling requires uncontaminated waste as feedstock material and is also limited in scale – which means that a lot of types of plastic cannot be recycled using this method.

While we support mechanical recycling, we believe it cannot fully solve the problem of plastic waste – and this is why we choose chemical recycling as part of our technological solution for tackling the plastic crisis. Chemical recycling is capable of processing almost any type of plastic material, including plastics which still have contamination. Moreover, chemical recycling gives us the opportunity to scale up the process of recycling and push us faster to the ultimate goal of circular economy, by bringing the materials back in the raw material cycle. With the WASTX Plastic, plastic waste is transformed into pyrolysis oil, which can be used to produce new plastics. 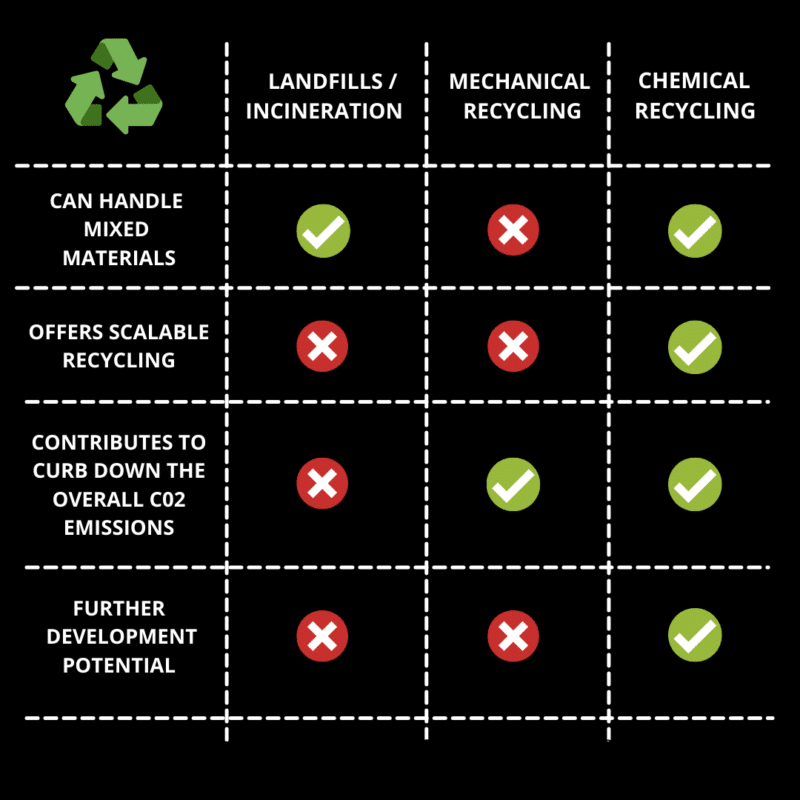 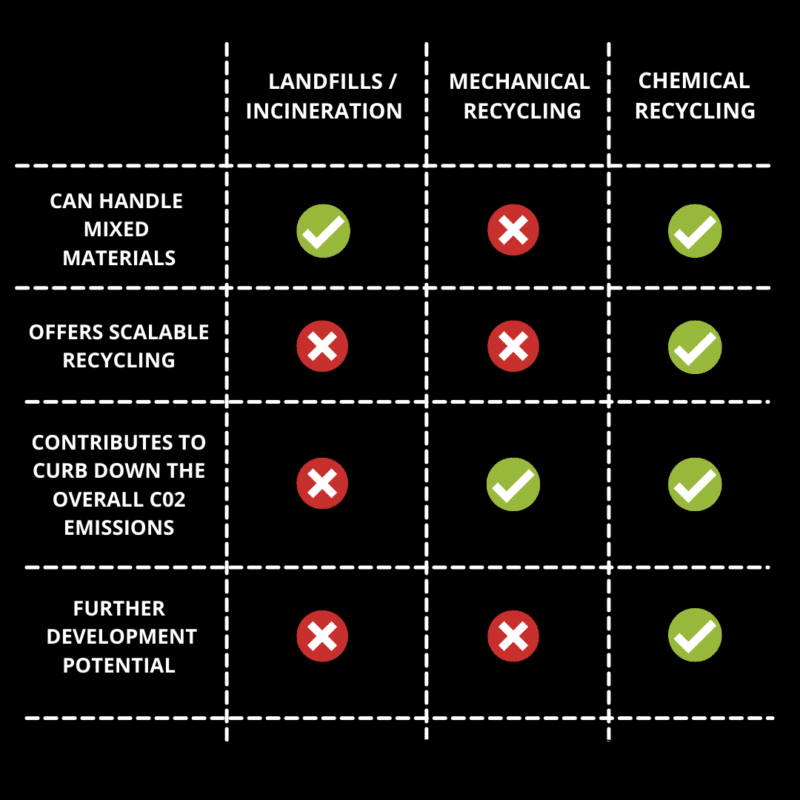 Chemical recycling and C02: How do we help to cut down C02 emissions

Biofabrik’s WASTX Plastic technology is not only revolutionary because we offer a decentralized and fully automated solution for closing the plastic loop. Our plants also help to dramatically reduce the amount of carbon dioxide emissions – with the WASTX Plastic plants, plastic waste is not dumped in landfills or incinerated but it’s transformed into pyrolysis oil, which can be used to produce new plastics.

Moreover, chemical recycling also cuts down the need of extracting more crude oil – one of the most widely used resources on the Planet. As the main ingredient for producing plastics, much less crude oil will be needed in the future if we massively implement the pyrolysis technology – less crude oil, fewer plastics produced from it – less plastic incinerated – less C02 in our environment. Making new plastics from pyrolysis oil rather than crude oil is much more efficient and economically viable – the model can be applied on a very big scale, with a minimum harmful effect on our environment.

The road to zero emissions (and no plastic)

Our recycling technology is able to significantly reduce carbon dioxide emissions and we have really just started. We are already unique on the market when it comes to plastic recycling solutions with the best possible environmental impact.  Our CTO Ben Richters has also commented on this: “We are doing our best to make our WASTX Plastic completely emission-free in the future – as we always strive to become better and better and offer the best solutions available on the market.”

Keeping our environment clean is our number one priority since the foundation of our company. We have dedicated over a decade of time and effort to invent the most promising technology which can solve the plastic crisis – in doing so we also want to help mitigate other environmental problems – paving the road for Zero C02 emissions and zero plastic waste in the future!

Follow us on Facebook and LinkedIn and subscribe to our newsletter to never miss any updates and join us on our journey to a healthier planet.

Hi! I'm Denny - a recently graduated journalism student with a huge passion for writing & content creation. As a part of the Biofabrik team, I'm responsible for Biofabrik's blog, social channels and press area!