Our sustainable fertilizer made from pasture grass will be four years old this month. What began as a sales problem for our biorefinery, thousands of satisfied users can no longer imagine to live without. We pause for a moment and look back on a rapid development, which our team now attributes to the “Blattwerk effect”.

“I firmly believe that missionaries make better products. They care more. For a missionary, it’s not just about business. There has to be a business, and the business has to make sense, but that is not why you do it. They do it because they have something that motivates them.”

How it all began: Our biorefinery

Particularly with a possible use as fertilizer the allegedly too low “NPK value” (short for nitrogen (N), phosphorus (P), potassium (K)) was criticized compared to classical fertilizers. Quite ironic, because it was precisely the reduction of the unchecked mining of these finite fossil resources that we were concerned about.

Video: The prototype of our biorefinery. Image film from the year 2016

So we made a virtue of duty and decided to prove it. We wanted to establish our own fertilizer brand and demonstrate with satisfied customers that fertilizer can be sustainable and yet effective. First of all, of course, we had to get to grips with it in depth and fine-tune our recipe.

In first internal growth tests, our prototypes, at that time still under the working names “Amineon” and “AminooPlus”, confirmed our assumptions. We achieved more than 150 % more growth compared with classic NPK fertilizers:

Admittedly, our first design serve also lacked some finishing touches. In hundreds of emails we discussed countless name and design drafts and searched for weeks for a packaging that you don’t want to hide in the cupboard, but rather integrate decoratively in the garden or on the windowsill.

Finally, it was our CEO Olli who introduced us to the name “Blattwerk” and the dark design in April 2016. We were the first in the fertilizer sector to position ourselves with a black bottle, which would later even inspire imitators. 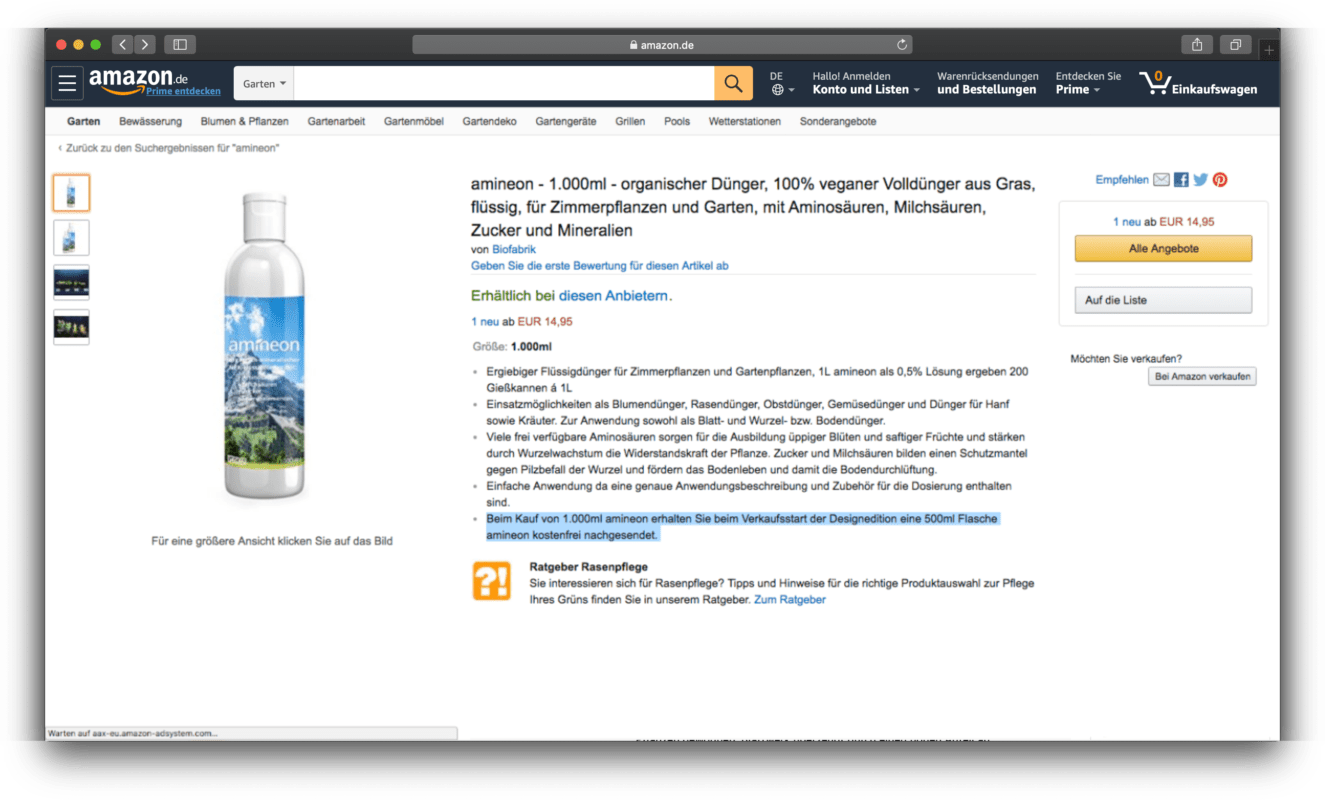 Photo: Our prototype of Blattwerk, at that time still called “Amineon”

But even though we knew that we had a really good product and felt comfortable with name and design – what happened in the following 3 years surprised even us. Within a very short time, Blattwerk climbed to the top of the Amazon charts and even became the Amazon choice: 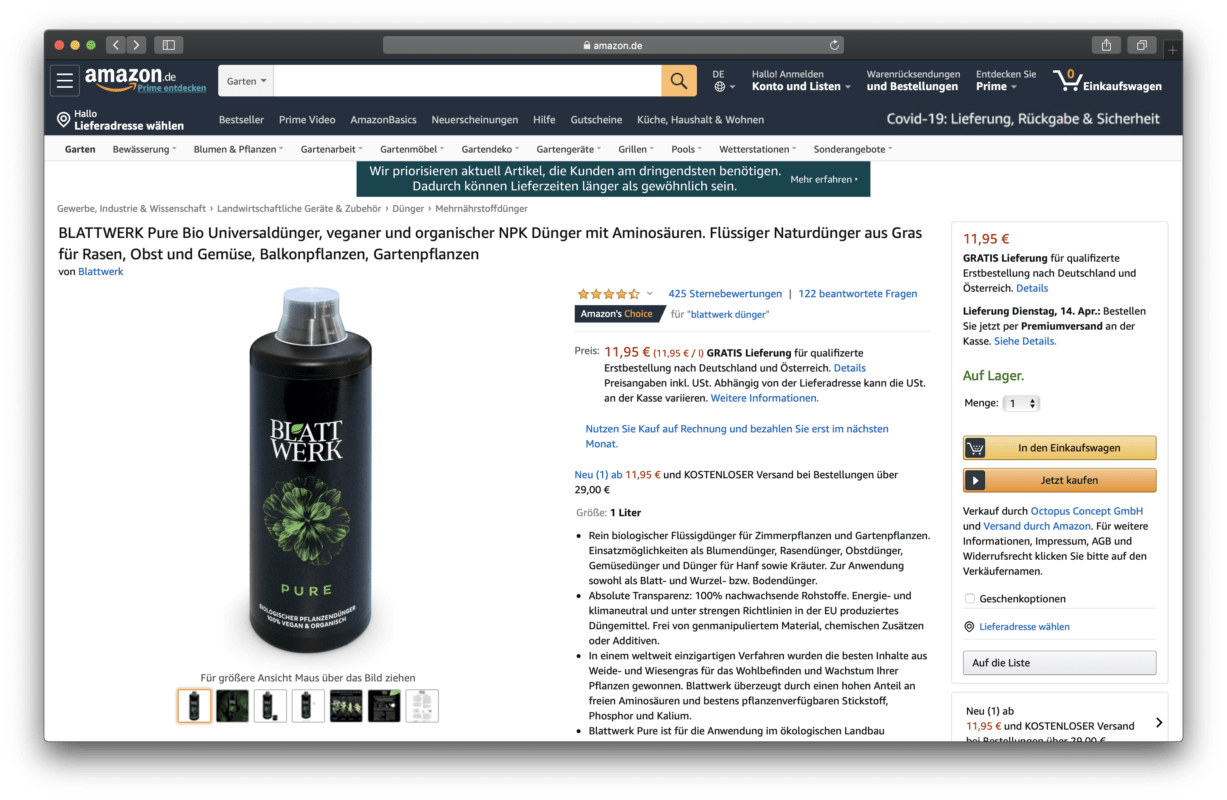 This rapid growth is not based on a particularly sophisticated success strategy, but above all on loyal regular customers and referrals. Because really good products are gladly ordered again and are gladly recommended. In the Biofabrik team we now call this the “Blattwerk effect”: 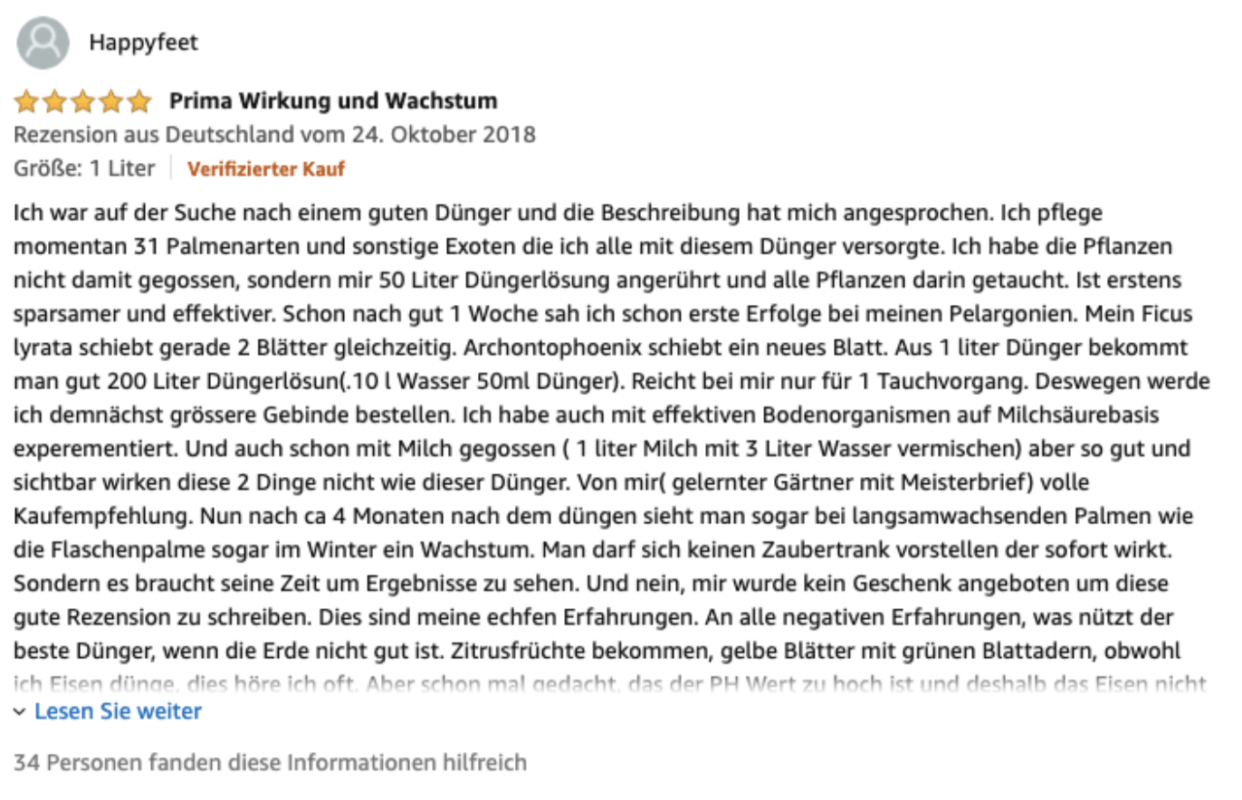 Photos: More than 300 5-star ratings speak for themselves (source: Amazon)

In the coming months, we will expand the Blattwerk family for other special applications such as berries, roses or even lawns and work on increasing its use in agriculture with scientifically documented growth tests.

As award-winning giant pumpkin breeder Oliver Grafe illustrates with this photo – sustainable agriculture can very well be productive – and in view of rapidly dwindling fossil resources and a world population that continues to grow, it must be:

Photo: Oliver Grafe with his giant pumpkin in 2019

You can also follow Blattwerk on Facebook and Instagram. And through our Biofabrik newsletter we keep you up to date on our technology projects as well as on Blattwerk.