We reached the next milestone! Four weeks ago we told you about the biggest success in the history of the Biofabrik: the successful endurance test of our WASTX Plastic. Now we have tried our hands at one of the most serious global environmental problems: plastic waste from the sea.

Plastic waste in the oceans – bad for climate and health

Every year about 8 million tons of plastic waste end up in the oceans. It is estimated that some 150 million tonnes are already in the world’s waters. According to a study by the Ellen MacArthur Foundation the mass of plastic waste in the sea could be greater than that of fish by the year 2050. The effects on us and the environment are still not completely understood. But what we already know is more than disturbing: If plastic is exposed to sunlight, it not only decomposes but also releases methane – a gas that has 28 times the global warming potential of CO2. LDPE, i.e. polyethylene of low density, as used for example in packaging films or plastic carrier bags, releases a particularly high amount of methane according to the investigations. The fact that PE and PP are released into the oceans at all is not only critical from an environmental point of view. Both are so-called polyolefins that can be recycled with the right technology. Over time, the material decays further and further, first into microplastics with a diameter of 5 millimetres and finally into nanoplastics with a diameter of less than one micrometre. Researchers at the Alfred-Wegener-Institute in Bremerhaven were able to prove in studies with mussels that these particles pass into the cells of the animals where they cause inflammatory reactions. As a result animals that were fed such plastic particles remained smaller than animals that were not exposed to this influence. Video: In the popular diving area Manta Point off Bali there is now more plastic waste than Mantas to be seen.

Marine plastic waste collected – And then?

The background just described makes it clear: we have to get the plastic waste out of the sea. For years, various organizations such as The Ocean Cleanup, Seabin, Pacific Garbage Screening and One Earth – One Ocean e.V. (OEOO) have been working on concepts to remove plastic waste from the oceans. The recovery of the plastic waste alone is extremely difficult, but even if it succeeds, the waste has not yet been dealt with – depositing it on land would hardly be better. So the question immediately arises: How can the collected plastic waste from the sea be sensibly recycled? Plastic waste disintegrates over the course of several hundred years – if ever. That is the common understanding and correct. However, it is worth taking a closer look: In fact, processes start immediately as soon as plastic waste is exposed to weather conditions, salt water and sunlight. The hydrocarbon compounds disintegrate and the material becomes smaller and smaller – until it eventually has a diameter of less than 5 mm and is therefore classified as microplastic. The smaller the plastic parts become, the larger their surface area is and the more they absorb different substances that bind to the plastic parts. This means that if plastic waste has been exposed to various environmental influences for a while, it not only loses its material properties, but also contains other adhesions, including heavy metals like lead for instance. Mechanical recycling, i.e. using plastic waste directly to produce new products ( for example by producing recyclates) is therefore no longer possible for marine plastics and also for waste that has already been stored for some time in the rural environment or in landfills.

Pyrolysis for the recycling of marine plastics

The principle of pyrolysis has been known for over a hundred years: The long-chain hydrocarbon compounds of plastics are cracked by heating in the absence of oxygen. The result is short-chain hydrocarbon compounds that are liquid or gaseous. This is exactly the principle we use at WASTX Plastic. The resulting fuel complies with the standards of various low-sulphur Marine Diesel Oils (MDO). In addition, the fuel can be converted into electrical energy in generators or turbines. Contrary to other recycling technologies, our plant is not dependent on pure material flows, but can recycle mixed and contaminated plastic waste. Even organic adhesions such as algae do not interfere with the process. This enables WASTX Plastic to deal with the special requirements marine plastic places on a recycling system. Now WASTX Plastic had to prove itself in an endurance test in handling marine plastics. 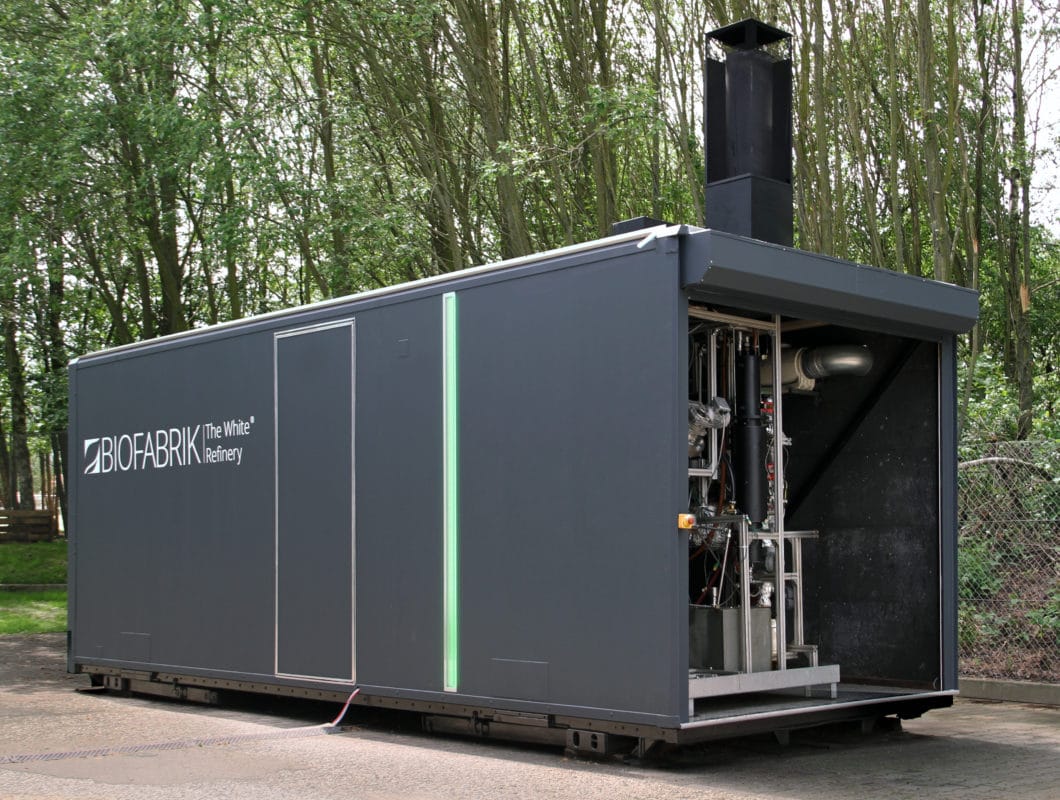 In cooperation with the environmental organization One Earth – One Ocean e.V. (OEOO) we have already carried out successful tests for the re-oiling of marine plastics in June 2018. (The recycling magazine reported). Now OEOO has delivered a further 300 kilograms of plastic waste collected from the sea, which was successfully processed in continuous operation with WASTX Plastic. What OEOO provided us with was a good cross-section of what the organization salvages from the waters: high and low density polyethylene (HDPE, LDPE), polypropylene (PP), mostly in the form of composites, which also contained various other types of plastic. In addition to “normal” packaging waste, WASTX Plastic also processed a ghost net made of PE. In addition, PURE – an oil absorbent cotton wool – soaked in waste oil was successfully processed for the first time. PURE is a special DEUREX oil absorbent pad that is able to absorb oil in water by a multiple of its own weight. It can be used, for example, for cleaning port basins or oil-contaminated coastal sections following oil spills. By mastering all the challenges of maritime plastic waste, our WASTX Plastic proves to be the first decentralized, profitable solution for its recycling.

Processed plastic waste from the sea 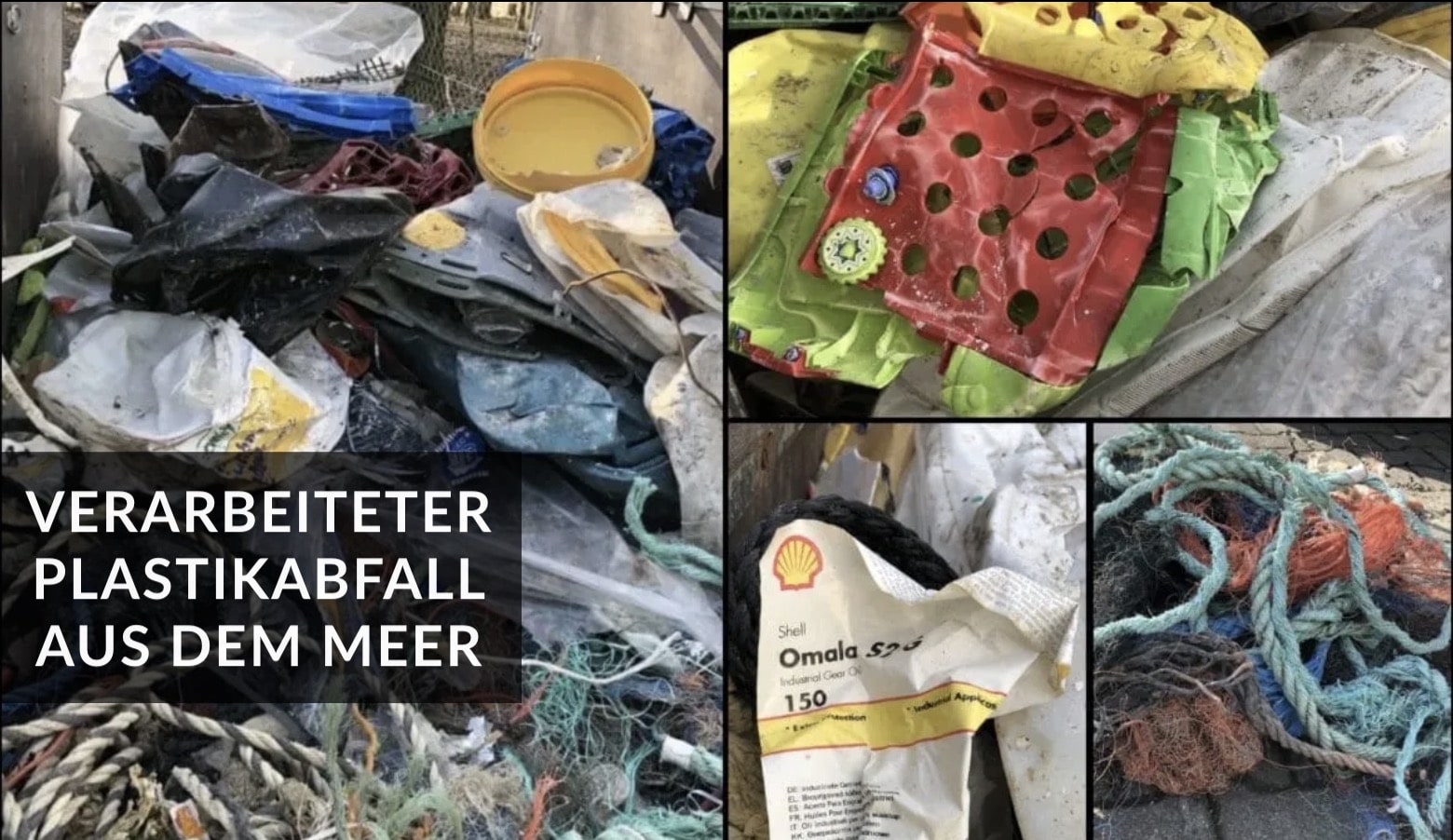 After an incredible journey full of highs and lows, we are now incredibly proud of what we have achieved. We started with the goal of developing a profitable solution to the plastic waste problem and have now finally demonstrated that it is possible. Developments are now proceeding faster and faster: On the one hand, our first series production line is nearing completion, and in July we will put the first line into operation at the customer’s site. Parallel to this, we are developing the new generation, which can process four times the amount of plastic waste. We have to be so fast now, because the problem becomes more and more gigantic the longer we do nothing about it. After the Chinese import ban on plastic waste, plastic waste is exported to other – in some cases even less developed – countries such as Malaysia or Indonesia. Last year alone, 100,000 tons of plastic waste from Germany landed in Malaysia – despite waste separation and an “excellent” recycling system. There, so-called garbage pickers collect and sort the waste by hand and earn the equivalent of only about 60 ct. per day. Plastic waste is currently mostly worthless and therefore remains lying or is illegally incinerated. With the WASTX Plastic and the associated deposit system, the plastic waste becomes so valuable that it is not only worth collecting it, but the pickers can also increase their income by a multiple and thus enable their families to lead a better life.

You can find more information about this topic here:

At the beginning of the year a part of the team was visiting Bali to get an impression of the situation. Of course we knew the pictures of huge amounts of plastic waste on the beach, but the number of hidden places where plastic waste is dumped was very surprising for us. Bali maybe like no other place in the world is a symbol for what we are doing to Paradise Earth. At this point we would like to share the impressive pictures with you, that we (partly secretly) took with a drone. Follow us on Facebook or sign up to our Newsletter to receive regular updates on our products and projects.

Convince yourself and visit our demonstration plant in Dresden

The prototype in ongoing operation and the first WASTX Plastic series production line currently under construction are ready for inspection by the press, prospective buyers, potential suppliers and customers at our Dresden location. Arrange an appointment now
[put_wpgm id=”4″]